David Nucifora believes Rugby Australia must move to a centralised system and has urged the national body to make “some hard choices” if they want to return to past glories.

But even if they do, the man who has overseen Ireland’s rise to the top of the summit says he will unlikely be the one to implement the reform needed for Australian rugby to make its own comeback when he plans to leave his Irish post following the 2024 Olympics.

Indeed, it was almost a year ago that Rugby Australia CEO Andy Marinos flew to Dublin to meet with the former Wallaby, who led the Brumbies to their last Super Rugby title in 2004 and is in his ninth season as Ireland’s director of rugby.

Marinos wanted to lure Nucifora home to lead the charge of centralisation, or as the CEO would call it “alignment”, in Australia, almost a decade after the states voted against Nucifora’s reform measures, thereby ending his association with the then-Australian Rugby Union.

“It was nice of Andy to come and chat,” Nucifora revealed in a wide-ranging conversation with The Roar about how Ireland, a population of just over five million people, became the envy of the rugby world.

“But I had my go at it. I tried to do my best to put in place certain things that I thought would work and there were other people that had different views.

“I don’t think it’d be wise to revisit. I think that you have a go at something once, you do your best and then if it’s not good enough or it didn’t work you move on, do something else.

“What’s changed back there that I could think that, what I can offer, can change what they’re doing still?

Friend, who is coming to the end of his five-year stint with Connacht and helped lure former Brumbies star Mack Hansen to the west of Ireland, said centralisation was the “way forward”.

He went even further, saying RA would be “mad not to be talking” to Nucifora.

The lines of communication are open, with RA still open to the idea of Nucifora returning to the game.
Nucifora, however, says he’s more likely to be found on a Gold Coast beach than a Moore Park boardroom.

“I do. I do. My challenge to them back there is it is doable, it is achievable, they can do it. They’ve just got to start making some hard choices,” he said.

“I’m not saying for a moment that it would be identical to what we do here, but I think they definitely do because one of the rewards from it is financial efficiency.

“I think they’re desperately in need of that and then it becomes operational and performance orientated as well.”

He added it was a process Australian Rugby has needed to look at “for a long time”, but he felt it could be hard to drive through considering the game’s current governance model.

Nucifora is a divisive figure throughout the rugby world. Everywhere he has gone eggshells have been broken.

As one Australian source said, “All the guys thought he was a fraud, I suspect he is better than that”.

Even today, he has his detractors as Ireland’s DOR, with “friction” a constant within the centralised model where he is, as Friend says, the “main man”.

But there is one thing that can’t be denied about Nucifora: he gets results, and Ireland have never had such consistent success before.

“I like winning. I’m competitive,” Nucifora says. “And I just want to put something together that is robust, sustainable and is high performing.”

Under his watch Ireland have been world No.1 twice, and earlier this year claimed a remarkable come-from-behind series win over the All Blacks in New Zealand.

That success came six years after Ireland claimed their first ever win over the All Blacks, in Chicago.

It was a target for Nucifora when he arrived in the Irish capital.

“When you rock up from where we live, and you go, you’re telling me you haven’t beaten New Zealand in 108 years? Like, get out. Why?” Nucifora said.

“Understanding that and then working out how do we change that, beating the Kiwis in Chicago in 2016 was a big, big moment.

“Beating them here in Dublin for the first time was a big moment. The tour (in July) was huge. If you told Irish people that they were going to win a series in New Zealand. For a lot of people, they understand that it’s as hard as winning the World Cup.”

It’s not just the Ireland men’s team on the rise, with their sevens teams going from strength to strength.
Indeed, the men’s sevens side claimed a bronze medal at the World Cup while Amee-Leigh Murphy Crowe has been nominated by World Rugby for women’s sevens player of the year.

“The other part, for me, was down in South Africa there at the Rugby Sevens World Cup. Like who would have thought you’d see on a podium in a Sevens World Cup, you’d see Fiji, New Zealand and Ireland? Like get out,” Nucifora said.

Funnily enough the Australian originally said “no” to a head-hunter from London to the job offer with Ireland but ended up in “bloody Dublin”.

Ultimately, he took the job because he could see the potential.

“The Irish system, just the way that it was designed, I could see it had the ability to deliver a really good rugby program,” he said. “They just hadn’t got to that point in their own evolution that they could understand what they were sitting on.”

Nucifora says an investment in youth “six or seven years ago” has been essential to Ireland’s rise, where the Irish Rugby Football Union introduced the National Talent Squad to “develop players faster”.

The program has no more than 88 positions available, with roughly 22 per province, and lasts for no more than three years.

This year, however, there are just 60 players in the academy, which targets kids from the age of 16.
While the centralisation model was loosely in place before Nucifora arrived, the nation needed someone to drive it to understand the benefits out of it.

Yet, Nucifora is not a dictator, according to Friend.

“He’s very involved, like he’s the main man. Not for Connacht, he is for Ireland,” Friend said.

“We seek his advice, as I think most provinces do. You want to know what his thoughts are on certain players because he can get across all the provinces to watch them, so he’ll have a different view on it.

“He’s got a lot of rugby experience, so you are going to seek his views on things, but he doesn’t tell you what you can and can’t do. He just says, here’s my thoughts and go for your life. I think he manages that part of it well. He’s there as a resource for people to use and if you choose to use him, I think you get the benefit of that. If you choose not to, he’s not going to force it down your throat.” 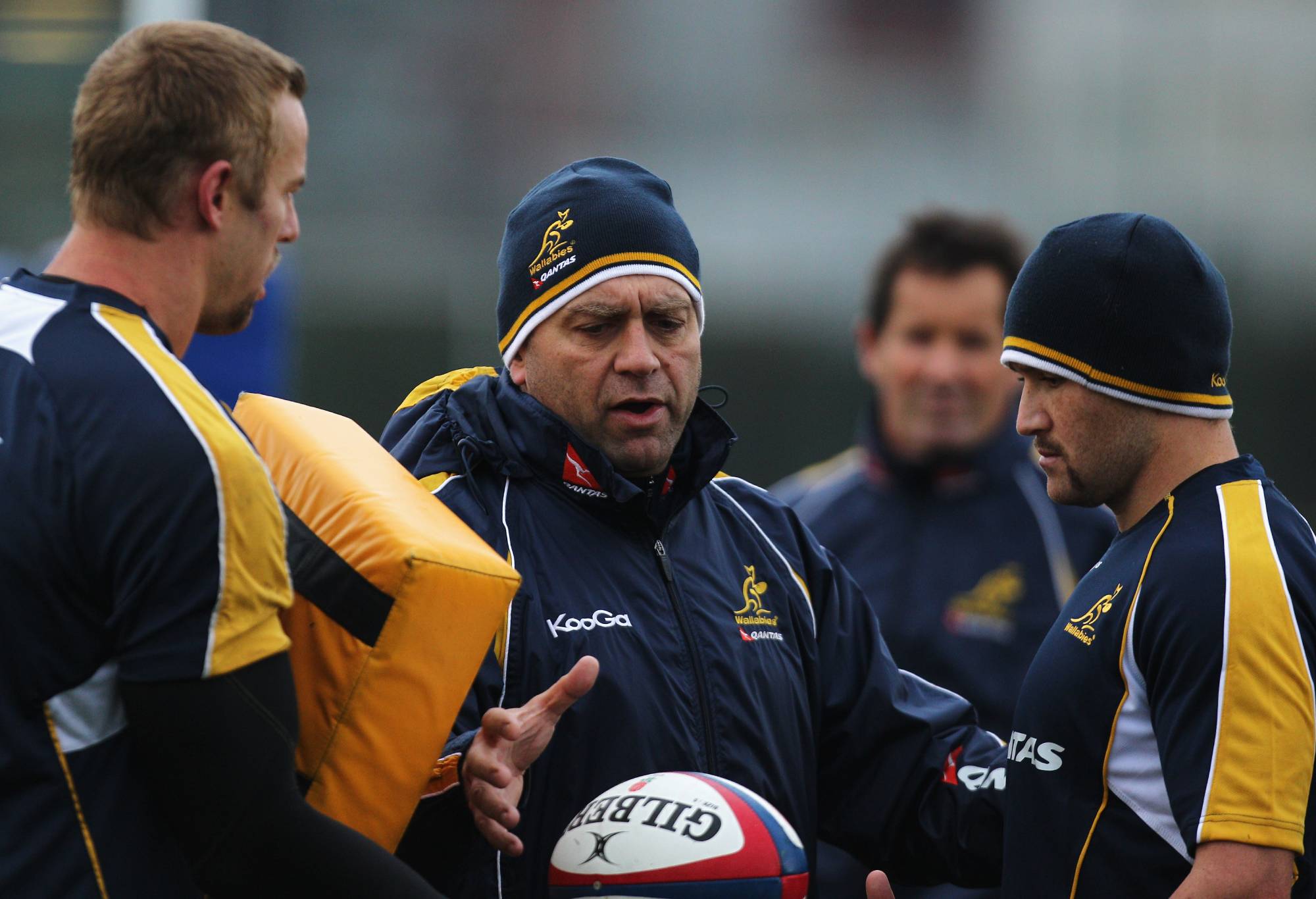 David Nucifora was a Wallabies assistant coach in 2010. (Photo by Dean Mouhtaropoulos/Getty Images)

Nucifora, too, says it is vital everyone, across the four provinces, stays on track and does not go rogue.

“The key thing when you are relatively small is to be absolutely aligned in what you do,” he said. “You’ve got to be aligned in if you really want to get the best out of any model.

“Yes, you need the structures and the processes, but you need people of similar mindsets. It doesn’t mean they’re all the same, but it means they understand the benefits of that.

“I won’t say they all went straightaway, ‘well, that’s a great idea.’ They definitely didn’t, and we still have plenty of friction within our system, which you have to have if it’s high performance.

“But people genuinely believe that the model works and they understand that there will be times where it may not favour them and will favour some other area of the game, but they know that ultimately pumps out good results and gives us the best chance to be successful.”

Ultimately how Ireland perform at next year’s World Cup in France will likely define Nucifora’s legacy.
If that is the case, it is a cruel judgement because only one nation can win.

Incredibly, of the top four on the World Rugby rankings, which features New Zealand, South Africa, France and Ireland, at most only two of those nations will progress to the final four, such is the way the draw has played out.

Nucifora doesn’t hide his ambition for the tournament, declaring “we want to win the thing” but he knows how hard it will be to claim only the north’s second World Cup.

He does, however, believe the consistency of the national side shows the benefits of the centralised model.
“For me, it’s the durability and sustainability of the system,” he said.

“What we have managed to do over the last four or five years is very rarely we have been out of the top four.”

Curiously, Nucifora says he hopes he is forgotten down the track.

“I think the thing that I’d like the most is when I leave here is they don’t mention my name,” he said.

“You want the system and the model to speak for itself. You don’t want people to say, ‘that’s what he did or that’s what he wanted.’

“You actually want people just to accept that, that’s the Irish way. That’s the way we do it. And people will take that and over time people will build on it because they’re going to have to, if they want to stay (at the top).”

For now, Ireland is on top of the world rankings.

Australia, meanwhile, once again find themselves at cross-roads, with an administration attempting to usher through reform.

Whether the states jump on board remains to be seen, but a decade after blocking Nucifora’s ideas they only need to look at the men wearing green this weekend – and the sold out crowd at the Aviva – to see what they are missing out on.